This cemetery was established on land donated by Publius Virgil Monroe sometime around 1840. The first burial recorded was in 1841, making this the first and oldest cemetery in New Berlin.  It is still an active cemetery.  The first death in New Berlin (formerly called Mentor), was a Mr. Klein (Kline) in 1837 who was supposed to have been buried in this cemetery, but no tombstone was ever found. There is also a potter’s field.  If a transient died while passing through the township, they would be buried in this section; however, there are no grave markers for them. 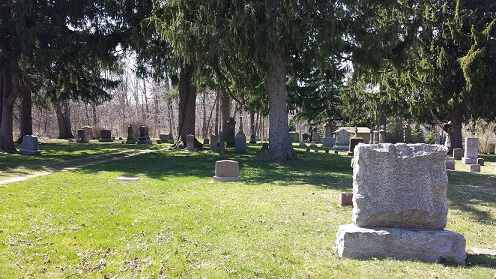 In 1857 a Cemetery Association was founded and Daniel Ewer became the first director.  The families of many of the first settlers chose to make this their final resting place.  As you walk these hallowed grounds, you will find names such as Boyd, Meidenbauer, Winton, Killips, Monroe, Church, Korn and Harris.  These people were pioneer aldermen, shopkeepers, the city’s first teacher, large land owners, a State Assemblyman and a murder victim.

P.V. Monroe donated the land upon the death of his six month old daughter Harriet.  A wealthy Yankee, he arrived in this area in 1837 and was the first town clerk.  He is credited with convincing the council to rename the city New Berlin after the New York hometown of some of the original settlers, himself included.  His stone is nearly unreadable.  Of his nine children only Harriet and Joseph (Civil War vet, 28th Wisconsin) are buried here.

Thomas Boyd was the youngest of three Scottish-born immigrant brothers to arrive in the 1840s.  He and his wife Janet had to bury an infant at sea.  Their first home was a log cabin, but by 1860 Thomas had built a two-story frame home on Calhoun Rd. which still stands and has been continuously inhabited by five generations of the family.  His descendants have been the caretakers of this cemetery since 1910.

Theodore S. Winton bought Daniel Church’s store in 1866 and was postmaster until his son Louis built a new store in 1882.  Theodore was the father of Theodora Winton Youmans, a prominent local suffragist.  Both Winton homes are now located in the New Berlin Historical Park.

Johan (John) K. Meidenbauer, age 30 and his wife Catherine arrived in this area in 1848 and bought an existing log cabin (also located in the Historical Park) and farm.  As John and Catherine’s only child had died, he encouraged his nephew John M. Meidenbauer to come to Wisconsin.  He arrived in 1877 and married Anna Schoenwalder in 1884.  John K willed the farm to his nephew on the provision that he would care for JK and his wife so long as they all lived.  John M. and Anna raised twelve children in the log home.

Jacob Korn’s arrival in 1840 was the beginning of the migration of Germans into New Berlin.  In 1860 he was the richest German in the area with a financial worth of $15,500.  He served in Company D of the 6th Wisconsin during the Civil War.