Following the Great Depression's recession, this house was built in 1939-40, with the materials recycled from Washington Schoolhouse demolition which stood on Hwy 100 & Capitol Dr. The "cream city" brick was collected from the school site, cleaned and mortared to the house along with Lannon stone to produce a unique bricking design. A local builder, Timothy Heaton, followed William's son Charles's architectural plan. Neighbor Joseph Casper, dug the basement with the use of his team of horses. A "gentleman farmer,” William raised sheep, geese, chickens and lastly kept bees and sold Root Bee Supplies. Often inventing, William could be seen riding his homemade cart in the spring harvesting asparagus. He supplied a large portion to the Fruit Ranch (once standing at 76th & Bluemound). Although its use has been abandoned, one bay of the garage has part of his invented electric door opener protruding. The house remains in the family. 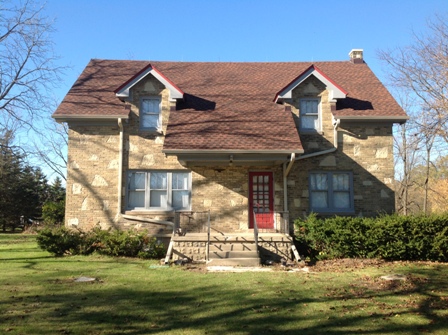